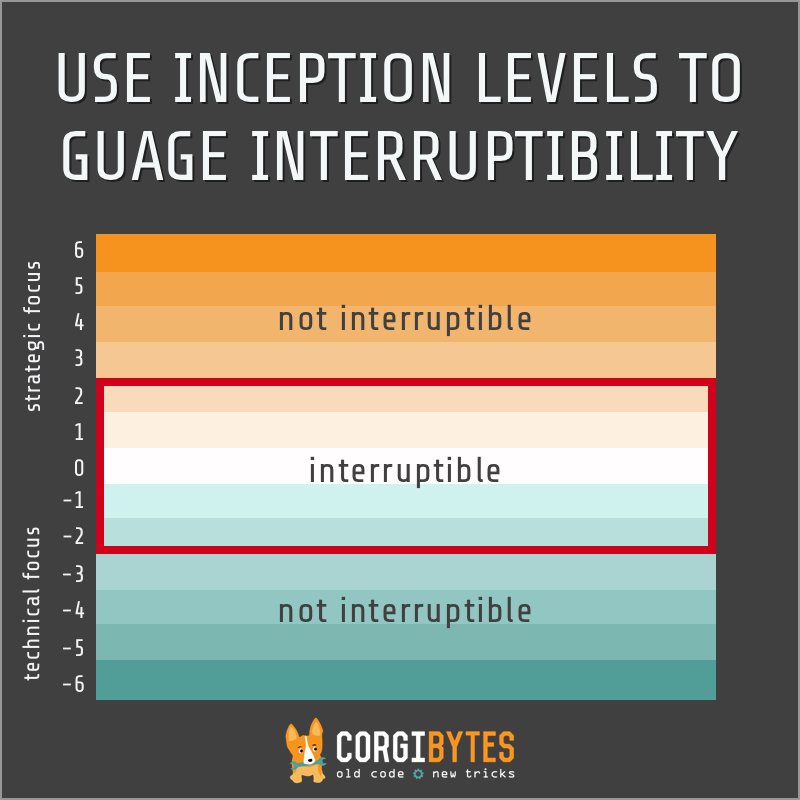 For years, when I needed to get Scott's attention, I'd use this question. I thought it was polite. I wanted to honor his time and not bother him if he was busy. At the same time, I was usually blocked. I tried not to disturb him needlessly. The answer could have well been "no" and my response would have been, "No worries. Get back to me when you can." But it never happened that way. Instead, I got complete and utter frustration.

And I would be confused as to why.

Maybe this is happening to you now as you try to communicate to your engineers.

After about five years, we started to figure out what was going on. One day, after Scott got frustrated, he responded, "I was at level Nine."

A light bulb clicked in my brain, and I immediately understood my mistake. I had crumbled his focus just like how dreams collapse in the movie Inception. What I saw when Scott got angry was frustration that I had taken him out of a place where he had built so much focus was so tantalizingly close to a solution, and then had it all ripped away in an instant.

This concept is compounded when you're working on complex problems. In the movie Inception, there's the idea of a "dream within a dream." This happens in engineering too: a mental model within a mental model. The more models you have to keep in your mind at one time, the more time it takes to build up to that state. If you come out of it too quickly, you almost get the mental equivalent of decompression sickness.

We started using this analogy and realized it worked beautifully. The problem with asking engineers if they "have a sec" is that the amount of mental energy needed to evaluate that question will inherently take them out of their flow state. They have to set aside their fragile mental model an attempt to construct something completely different along side it. A series of assessments starts to take place:

By the time the engineer starts to focus on the answer to the question "Do you have a sec?" they start to see the mental model of the complex solution break apart, just like dreams do in the movie Inception. In their minds, they shift back over to their original question, but it's too late. That world is crumbling, and it could take hours or sometimes days to get back to that state.

When Scott explained this, I felt for him. I understood how frustrating it is to have a solution so close but then it's torn away. I also understood that context switching is our biggest cost. The more our engineers can focus on a singular problem without having to switch contexts, the better value we deliver to our clients.

At the same time, I needed a way to determine if Scott was interruptible because there was no outward physical sign to tell me if he was at level zero or level nine. So we started experimenting with asking about the state of the inception level before anything else. Now, instead of asking "Got a sec?" I ask, "Inception level?"

Identifying a current inception level takes far less cognitive power than "Got a sec" but it gives the same information. In our framework, anything above a Level Two is uninterruptible.

As we started using this framework, we discovered this works just as well for me when I'm focused on a strategic problem. Since we've started using inception layers to describe our interruptibility, our team is more productive, our engineers are happier, and our desks are intact.

The Pyramid of Automated Tests

So you've decided that automated testing is a good thing for your team. After all, it's an excellent way…